Being a teenager is a true one-of-a-kind experience. There’s nothing like coming of age and figuring out the world around you and your place in it. It can also be an overwhelming time where life is full of changes.

The moods and attitudes of teenagers can be confusing and frustrating for friends and family to understand. It’s a lot to take in as adolescents recognize what it means to be an adult and what will be expected of them by society, let alone their family and peers.

For many teens, adolescence is the first time in life they’ll be faced with complex issues and have decisions to make that can have significant ramifications. As much as they think they’re ready for adulthood, many adolescents are also still struggling to find a place for the things they loved in childhood, whether it’s a hobby or a team, or a friend.

In trying to understand what teens are going through, it’s essential to keep in mind that the teenage brain is unique in this stage of development. Thankfully, adolescent psychology has come a long way in giving us insight into what’s going on with our brains throughout the teenage years.

Parent-child relationships and relationships with other authority figures often find themselves at odds with adolescents. They’re frustrated with their ways of reasoning and understanding of responsibility. The teen brain is complex, so it’s essential to understand what they are experiencing as they mature.

Stanford’s Children’s Health explains that in teenage brains, the connections between the emotional part of the brain and the decision-making part of the brain, and not necessarily at the same rate.

As a result, some behaviors become more common in teens:

These behaviors are caused by all of the changes and developments in the teenage body. Still, they also impact these developments so that those around the adolescents will start to notice.

The most apparent signs that teens are going through adolescence are the physical changes that come with puberty, sometimes rapidly. Both boys and girls start to get taller, with men growing until 18 and women growing until 16.

Teens go through these physical changes and also become very aware of their peers doing the same. This time is marked by sexual awareness, an experience that impacts every teenager differently. In some teens, sexual activities and relationships will begin at this age.

They’ll also discover the advantages and setbacks of their new bodies, leading to finding new hobbies and activities.

Adolescence also changes the way that the teenage brain thinks. During this period of cognitive development, teens learn how to think abstractly and engage in complex reasoning.  You’ll see these changes in how they learn math and science and explore more abstract concepts like happiness and love.

One of the expected outcomes of this stage of cognitive development is how teens engage in higher-risk behaviors. They’re testing out their ability to judge situations and make decisions for themselves, the results of which will inevitably vary.

In early adolescence, you’ll see teens start testing out abstract reasoning at home and school. Middle adolescence sees adolescents grasping the thought of their future but having trouble connecting to the decisions they’re making in the present.

In late adolescence, these young adults aren’t just thinking about decisions and their futures, but how other systems such as government and society also impact their lives.

Parents tend to get concerned when teenagers pull away from the family in early adolescence. This is common and expected for the teenage years, as teens work to develop a sense of self and build their identity in the context of their larger world. There’s a want and need for privacy that parents should be prepared for.

Increased self-awareness also can lead to increased self-criticism. Many adolescents are very rough on themselves, particularly about their appearance, during this time. It’s essential to keep a good dialogue going about these issues to keep problems from arising.

By late adolescence, young adults start getting a handle on their emotions. They have a stronger sense of self than ever before and will be more likely to explore different areas of their identity. Because emotions are so chaotic during this time, adolescent psychology examines how to navigate teens and their emotional development.

Social development is closely tied to emotional development, so you’ll see many of the characteristics of the two side by side. The dynamic changes occurring make way for adolescents to develop interpersonal connections, particularly the peer relationships that seem to supersede family ties during these years.

As teens explore their identity, they’ll dig through the context of their relationships. This is a time where adolescents will consider their sexual orientation and gender identity. The psychological changes they experience give them the clarity to see these issues in ways that some teens don’t think about before puberty.

During this time, teens are also learning what it means to juggle multiple friendships and relationships. These lessons come on a much larger scale than ever before because their peer groups are more extensive, thanks to social media and other technological developments. It forces them to develop their social skills quickly as they navigate interactions with different teachers, parents, coaches, peers, etc.

Adolescence is also when teens develop their sense of morality. As they mature, they go from a world with fixed rules and expectations to one where they are creating their own rules and working with more flexible ones in the settings they frequent.

Some of the risk-taking behaviors you might see in adolescence come from when a teen’s morals are challenged. They’ll often pick the thing that’s morally right to them, even when it’s at odds with familial beliefs or even the law. There can be many moral shifts that occur throughout the teenage years, so don’t be surprised to see some shifting ideals.

Throughout adolescent development, teens encounter their egos in a significant way for the first time. The effects of this adolescent egocentrism wane as young people go from early adolescence to late adolescence.

Parents, teachers, and other trusted adults can help guide teens through the changes of adolescence.

When you look at the big picture, adolescents are juggling quite a bit. They’re trying to navigate their physical development, mental health, and so much more. They can use guidance, though they may be reluctant to ask for it as they travel the space between childhood and adulthood.

Adolescent psychology is an excellent subject for parents of teens to get informed on because it deals with the issues that can impact adolescents as they move on into adulthood. Some of the significant issues teens face are asserting independence, exploring sexuality, drug use, and navigating peer relationships.

Many teens can also benefit from seeing an adolescent psychologist themselves. Adolescent psychologists can help them work through these complicated issues without the fear of backlash from a parent or guardian. They can learn positive ways to deal with their problems from an unbiased party.

Becoming autonomous means they must:

It may seem like parents should step back to help teens achieve independence. Indeed, they need to allow adolescents to make choices and experience consequences. That said, teens also need a lot of love and support from those closest to them.

Parents can help teens by showing them respect and guiding them without trying to assert strict control. Many parents find this challenging when it comes to certain subjects, such as sexuality and drug use.

Teen sexual development is as complex as any other area of adolescence. As they go from childhood to adulthood, adolescents need to understand the physical development they’re going through. They also have to learn how to protect and honor their bodies, deciding what they are and aren’t okay with their bodies.

Adolescents are also discovering their sexual identity and learning what healthy sexual relationships look like. More than half of teens become sexually active before the age of 18. Still, adolescents need to develop sexual understanding, boundaries, and awareness regardless of if they choose to engage in sexual activity.

They also need to learn relationships skills that will benefit them in sexual or romantic endeavors and all the different relationships they’ll have throughout adulthood.

Adolescence is a time for experimentation. One of the most significant strains on parent-child relationships in adolescence are attitudes around drug use and alcohol.

Teens need to understand the real consequences of drug use, which is why many high schools and peer groups outside of schools use this time to introduce drug education. However, recent research has shown that drug prevention programs that don’t provide teens with realistic depictions of drug use can be ineffective.

Hysterical warnings can make adolescents feel like they’re being treated like children who don’t understand the world.  Teens have the awareness necessary to tell the difference between realistic concerns and attempts to control them and their social lives. This is why parents need to think through their approach to addressing alcohol and drug use.

Peer relationships are arguably the most important part of a teenager’s life. It’s a time in their life where they learn how to build up their relationships and how to manage their breakdowns.

Adolescence is also the time where many teens experience competition with their peers. Academically and socially, adolescents can find themselves at odds with people they were once friends with. Talking to an adolescent psychology professional can help kids build the tools to handle social interactions with their peers.

Abnormal adolescent psychology can help teens who are also dealing with other mental health issues.

People are becoming more and more aware of mental health problems in culture today. As a result, people of all ages are being diagnosed with and treated for mental illnesses at younger ages.

Common mental health issues teens may find themselves dealing with include:

Teens dealing with any of these issues face particular risks and challenges. Parents may step in to try to help adolescents through this process, but an unbiased professional should step in when these issues are at play.

Finding the best solutions and tools to conquer these mental health issues in adolescence is key to their ability to do so in adulthood, so it’s essential to take the right course of action.

Adolescence is a transitional period that sees teens face physical development, mental health issues, struggles with impulse control and other behaviors, and more. Parents are eager to help their children through this season of life, but they aren’t always the best person to do so.

The best thing parents who are concerned about their teenagers as they go through adolescence can do is learn about adolescent psychology and support teenagers who are interested in talking to a therapist or psychiatrist to get help.  By offering empathy, nonjudgmental support, and an outlet for teenagers, they can work through a lot and learn about themselves as they gain the tools to conquer adulthood with a sound mind and heart.

The information on this page is not intended to be a replacement for treatment, diagnosis, or professional clinical advice. We do not recommend taking any action without consulting with a qualified mental health professional. If you are in a crisis or any other person may be in danger - don't use this site. These resources can provide you with immediate help.

Common D&D Personalities: How Your Traits Show In The Game

The legendary fantasy role-playing game D&D, or Dungeons & Dragons, has taken the world by storm. It enables millions of... 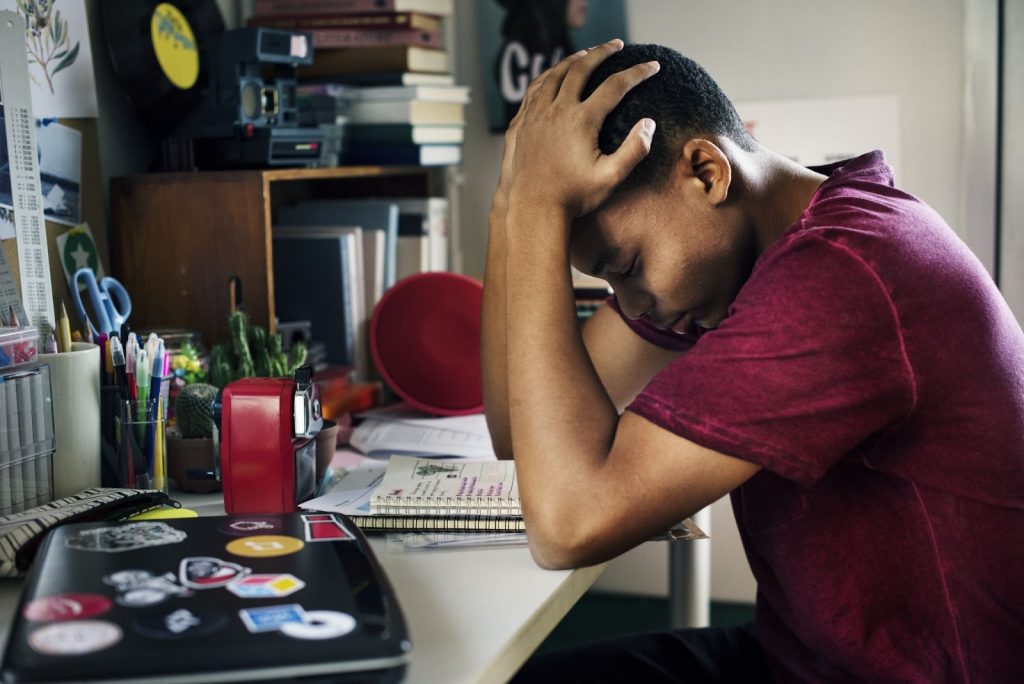 Teens are bound to experience some kind of stress. It’s an inevitability, and really, a fact of life. We, as...

Life is just plain stressful at times. This is true for adults, as well as adolescents. According to a new...